The most predictable thing about the world is that change will take place.

And some changes have similar patterns we’ve seen before.

I remember when I had just started out in youth ministry. It was the year 2000 and I was a shiny new youth pastor with big dreams and no clues. I was about 20 years old, so I brought the only three things I really knew at that time to my youth group: Fun, Jesus, and punk rock.

It was the height of the “worship wars” when Chris Tomlin didn’t know that fourth chord yet and Deliriou5? was cranking out the hits like I Could Sing of Your Love Forever, which ironically, we actually sung forever.

The negative was that churches were divided over the influx of new songs, and in particular, the new song sound.

But in all seriousness, the sad truth is that many churches fought so hard over what kinds of songs to sing, what instruments to play, what was godly and what was not, that many ended up splitting in two.

Some churches tried to bridge the gap with what was called “blended,” which is what happened to your brain after sitting through one of those services that attempted to please everyone and pleased no one. I could sing of your love forever played on the Organ Trail made me want to die of dysentery. Gag.

It was a lot of relational tension within churches and I don’t remember many people being that happy. Through all of that though, I believe the true issue could be distilled down to this:

The culture shifted, the people responded favorably, and the church resisted.

There is another culture shift happening today. And again, the people have responded favorably. Aaaaaaaand again the church seems to be resisting.

The world has gone digital. Mobile. And Attention has become the most sought-after commodity.

The average American is hit with over 10k marketing or branded messages a day, and it’s the brain’s job to sort it all out, decide what’s important, try to comprehend the important, and then do something with it.

Speaking of marketing messages, try Grammarly. It will help you spel betr and check your grammar as you go in almost any document. Try it HERE (affiliate).

At some point, the brain just starts to filter it all into the file 13 category called “noise.”

As we debate whether or not online church counts as attendance or if watching a service online is something we should endorse (read: debating songs and instruments), the people are out there doing it anyway.

Someone attends church the first Sunday of the month, they watch online the second, they miss the third but have home group that Sunday night, and attend church again the fourth. How many times, pastors, did they “attend?”

You’d say “2,” right? Many pastors will. But what does that person say?

This: I went every week. I missed church the third but we had home group, so I really went to church every week.

If you ask them if they feel “connected” or if they are a “regular” attendee, they would probably say yes, due in large part to the fact that they saw posts from the church in your Facebook group or on Instagram a few times each week and had a quick conversation with “the church” there and other church people.

Would your senior leadership agree? Or would they tell them that “you’re not really connecting by attending online” or something like that?

The dangerous disconnect here is that the people count this as community and many pastors and senior leaders do not. It’s the worship wars all over again gearing up to fight over a new version of the PowerPoint vs. hymnals battle royal.

And a split is coming if we’re not careful. Maybe even a war.

But War sucks. We know this from last time.

So, what is the answer? Well, it’s definitely not standing on your stage and making light of those who attend online. “Don’t just watch online, really try to get here.” That sentence is upsetting.

Those who can’t get out of the house and get to still feel like they are part of something big. Those who just needed a flipping day off from stuff and still thought that what you are putting out there on the internet was worth tuning in to.

Don’t berate them, thank them. They didn’t have to do any of that.

If you make them feel like it doesn’t count, then they will split off. It will make them feel guilty and no one wants to return to guilt, especially when they are trying to do something good with their time. Guilt is the weapon of the devil, not the Spirit.

Next we all make a few decisions together.

First, we have to decide to accept the fact that our culture is digitally-minded. You feel free to warn them about the things there that can harm them, but meanwhile, create a strategy for what is, not what we wish there was.

Second, we have to incorporate digital spaces into our ministry mindset. It’s ministry there, and we need to see it as such. Your people probably do.

Third, we have to wade out into unfamiliar waters regardless of how old you are or how terrified you are of social media, live video, making mistakes in front of people, or simply not appearing “polished.”

Fewer people care about that sort of thing than you think and they will applaud your authenticity, give you grace, and trust you more easily. Besides, if your main objection is how it looks (or how you will look) then it’s time to purge your heart of what might be a personal vanity issue.

Last, we have to remember what we were called to do. GO and make disciples. Not CALL disciples to us. The Holy Spirit calls, we’re called to go. So we should be going where the people are.

And the people? They are online. All day.

So what are you going to do? Will it be war? Or will it be God leading you to smash a few pots and yell at the enemy while you watch them destroy themselves? (Gideon, Book of Judges, Old Testament deep cut). Imagine how ridiculous the Israelite soldiers felt when Gideon told them the plan.

“Ok, 300 of us are going to put torches in pots and quietly surround the 10k Midianites at night. When I blow the trumpet, smash the pots, everybody yell really loud, and we’ll win. No, no seriously.”

Talk about doing something uncomfortable that you don’t understand! If God can use unexpected, ridiculous things to win wars, then He can certainly use unpolished, raw Instagram video of you in your office.

So choose your next move carefully. How we handle this moment will determine the next 20 years of ministry to the next generation. 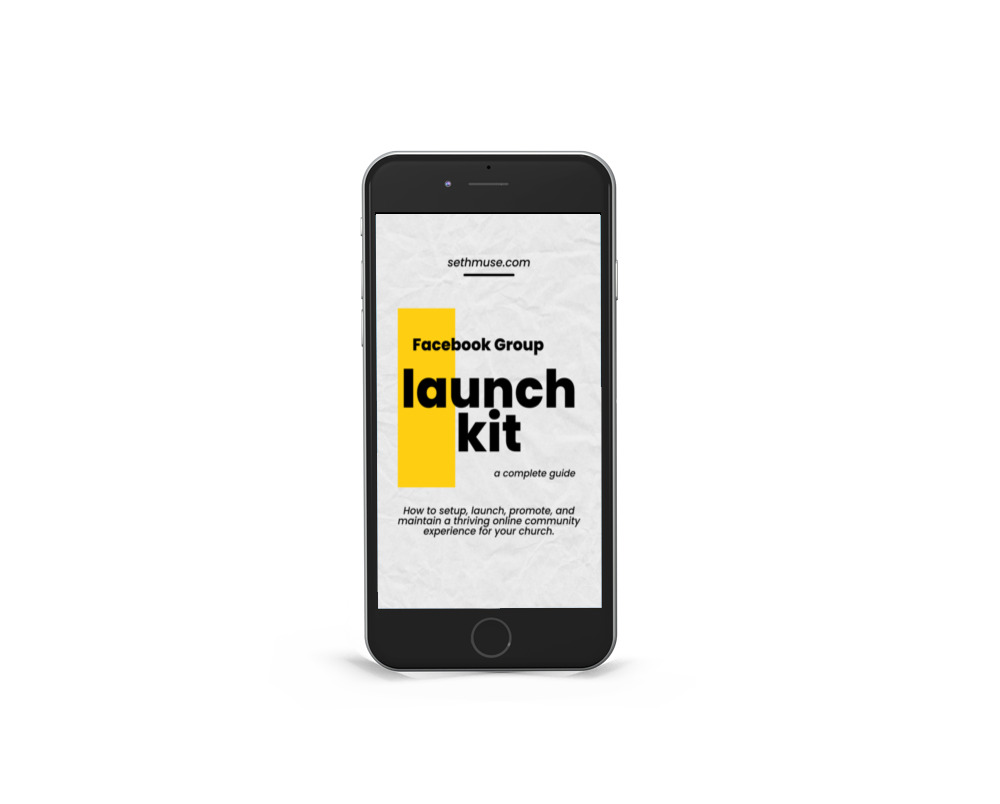 Launch & manage a successful Facebook Group at your church

Download this kit and let me guide you through the setup process, train your moderators or volunteers, and launch your group successfully.

Financial Secretaries will only count those who give….

Hey Larry, I want to try and understand your meaning clearly, so please correct me if I miss it. If I understand you like I think I do, I think I disagree. What I was talking about is what we count at attendance. A financial secretary or any person in that role is responsible to count money and things of that nature, so we can’t fault them for that. It’s the pastoral leadership who must begin to see other definitions of “attendance” in my opinion. Do you agree? Thanks for your comment!

Hey Seth, I do think there is somewhat of a battle within the church as to whether online church really “counts” as church, but I think there is a bigger war going on – the war between consumption church and genuine community church. If a person thinks being a part of a local church means showing up for a service for an hour a week, then whether that service is consumed in person or online probably makes little difference. But if being a part of a local church means loving one another, serving one another, bearing one another’s burdens, discipling… Read more »

Totally agree. I think if a person views church as a consumer only, whether online or in person, they are definitely missing out on the best part of being in a community of believers. I would say that the gap tends to be that we think that authentic community can only happen in person, to which I take issue. What I’m arguing for is more consideration for including online community as legitimate community. Thanks for your thoughts and I’d love to hear more of your heart on this.

Seth, Great read and insights. Thanks for putting it to paper (well, digital paper). No argument that senior leaders should be aware of culture shift that affects us generationally. Of course, as I am sure you will agree, just because the culture has moved does not mean that we move the goalposts as well. Obviously we should not guilt/shame/berate members who engage online. We can celebrate that as a step and note it as a “fruit” of maturity perhaps. No doubt…the connected but absent member has engaged in online community…and that action may reflect precisely what is best for them… Read more »

Well said Seth! I’m currently battling this war as well and made some of the exact same points in my meetings. This culture shift is HUGE and we really can’t afford to miss it because we have a fear of not filling our gigantic rooms.

Thanks, Haley. I personally know you’re awesome at this, so everybody go follow her! She will steer you straight.

I think its challenging for church leaders who think the church (organisation) should be at the centre of everything. It’s just not realistic.

The reality is that we live in a distracted and distributed world. Habits are changing much more quickly than a church will ever react in.

The culture has already shifted and the capital ‘C’ church needs to catch up.

Thanks, Steve. We used to let school out on Wednesdays at 2:15pm so we could do after school sports practices and still get to church Wednesday night on time. Not that way anymore! You’re spot on about the world being distracted and distributed. We have to adopt a “go and get” mentality for evangelism instead of the “come and see” strategy that has been. Thanks for reading!